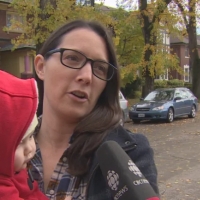 On million dollar homes and affordability

I read some bad articles on real estate. The market is crazy enough without people writing articles with no factual basis that stoke the fires of panic, so it's time I start having at them. The main problems with today's subject article are the sensational headline, and bad (or non-existent) analysis. Here is the recent CBC article I'll be discussing.

Right off the bat, it tries to grab you with "This neighbourhood might just be one the last remaining affordable areas to buy a home in Toronto." Though it says "Toronto," the article only discusses the Dufferin Grove neighbourhood, located southeast of Bloor & Dufferin. So we're dealing with a very downtown-centric or south-of-Bloor-centric viewpoint. Dear author: prices in Toronto (the whole 416) do get a lot more "affordable" as you move away from the downtown core.

The subtitle is just as bad: "Sandwiched between Toronto's Roncesvalles and Littly Italy is an area where homes under $1M still exist." It seems to be insinuating that $1 million dollars is the cut-off point for affordability. At one point the article seems to switch to a $700,000 cut-off, but in summing up the article they go back to "under-$1-million examples remain exceptions to the rule." So using $1 million, this statement is so far from reality. If we use facts (which we should) more than half of houses sold in Dufferin Grove this year to date (30 of 59) went for less than $1 million. If the author had only bothered to look at the TREB community just the other side of Bloor from Dufferin Grove (Dovercourt-Wallace Emerson-Junction), they would've found 73% of sales this year have been for less than $1 million.

The rest of the city counts too!

And don't forget about the whole rest of the 630 km2 city. Here is Q2 2016 sold data from the Toronto Real Estate Board (TREB).* There are 137 TREB Communities (what you and I call neighbourhoods) in 35 TREB zones (C1, W10, E9, etc.) all over the 416. While this includes your downtown favourites like Trinity-Bellwoods, it also includes everything from Agincourt North to The Beaches, to Black Creek and Mimico.

As far as "under-$1-million examples remain exceptions to the rule" goes, it's obviously far from true.

Maybe the writer has a detached house bias. Those are obviously much more likely to sell for more money. But even with the most expensive type of house, 50% of the communities/hoods across the 416 have an average home price of $1M or more (note averages are usually higher than the medians in the 416 market). But you shouldn't overlook the 27% of the 416 houses sold in Q2 2016 were semi-detached or attached/row/townhouses (more towards downtown and its smaller lots than out in the "inner suburbs"). If you're willing to put up with some party wall action, 77% of the city's neighbourhoods had an average priced semi-detached house under $1M (and half under $750K), and 80% of hoods had attached/row/townhouses that averaged less than $1M. The article does throw in that Dufferin Grove is "not the only such gem in the city," but these lower price points are way more common than the article lets on. Having 44 neighbourhoods where semis average less than $750,000 is hardly makes Dufferin Grove "one of the last affordable neighbourhoods in the city."

Below a million easier to find than indicated

The author also writes that "finding a listing below (one million dollars in Dufferin Grove) isn't easy." In the last 3 months 68% of listings have been under $1 million. So 68% versu 32% makes it 2.1 times easier to find a listing under a million. If you find it difficult to find the majority of the listings, you're doing it wrong. All this is still fairly consistent with numbers I ran for the year ending May 31, 2016:

The article at one point switches to mentioning a possible slowing down of the market evidenced by "home in 1 prime neighbourhood sold for $25K under asking" which is totally weak as far as evidence goes. Sold prices relative to asking/list prices have more to do with pricing strategy than how hot the market is. If average prices in an area are $800K and you price a listing for $599K and it sells for $900K since it's bigger and nicer than average, people go "Wow, $300K over asking!" But if it was priced closer to reality at $850K it would still likely sell for $900K if that's the market value — just likely to have 3 offers instead of 10. Same with a something that sells for less than asking — it doesn't in and of itself mean the market is slow, it just means that individual listing was overpriced.