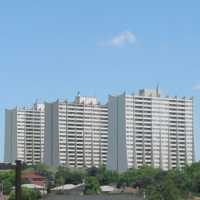 Is Renting for Suckers?

The Globe & Mail ran an article by Rob Carrick yesterday entitled "Why do Canada's renters get such a bad rap?" In short, it says as house prices keep climbing, we've got to get over this narrow-minded thinking.

photo via Architectural Conservancy of Ontario

I certainly agree with his overall point, but I found one of his statements curious. When quoting Canada's home ownership rate at 69%, he stated "That’s one of the highest rates of home ownership in the world among major industrialized countries." I looked into the data further (rates from 49 countries, mostly from 2014-2016 via Wikipedia), and it's true that Canada has the third highest rate out of the G8 countries, but it's actually closer to Germany's 53% than Russia's 84%, and in the lower third of this sampling of 49 countries.

I did some further researching and found an interesting Economist article on global house prices [Ed, with great interactive charts that you can customize. Without looking at any lines, I would have suspected that countries that have high ownership (e.g. Russia) would have low house prices relative to rent, and places with lower ownership rates (e.g. Japan and South Korea) would be because house prices are crazy-high versus rents. So much for that hypothesis.

As you can see, Russia (the orange line that dives down to 81) actually has relatively low home prices (but maybe if you have a house you're not going to walk away from it - though you see the US take a big dive when people were walking away from underwater mortgages). And Japan has the lowest line on here, and Germany (dark orange line that rises up to 95) is among the lowest, have some of the lowest home ownership rates (62% and 53% respectively). So while I'm sure this ratio plays into home ownership rates somewhat, it must also be that some societies place much more value on home ownership than others.

Carrick goes on to say that in "superstar" cities, renters are more common. This makes total sense with the run-up in prices that globally-desirable cities like Toronto and Vancouver have had in recent years. The Economist mentions "House prices in London, as well as in San Francisco, Vancouver and Stockholm have risen by an average of 13% a year over the past three years, while national prices have risen by 7.5%." If this trend in superstar cities persists, and home prices become more out of reach, you're going to see more people renting. And that's not inherently a bad thing. I've got several friends that have been in their apartments for over 10 years and have amazing rent controlled rates that make no sense to give up. It's a lot simpler lifestyle than worrying about house maintenance or condo boards, that's for sure. Also if you might only be in a place for a year or two, rent vs. own calculators will very likely to favour renting. According to a recent survey, 61% of Canadians are homeowners — so I take it 39% of Canadians (42% of Ontarians) rent, so renting is definitely not for suckers, and it looks like it may be on the rise — at least in large desirable cities like Toronto and Vancouver.