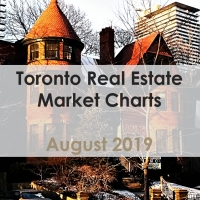 Below is what I saw in the August stats. As always, these are just selected highlights. The full set of market charts is available on SlideShare.

1) The return of sales volumes

In my May and June results blogs I talked about the return of lowrise (freehold) sales. was a theme from last month too. You can see below that things are still not far from 24 year lows, but in the last 6 months, this rolling 12 month number has risen by nearly 10% from its low of 11,463 transactions. The current figure of 12,562 is the first time over 12,500 since February 2018.

But it's not just freehold volumes that may have turned a corner. Rolling 12 month Condo volumes in the 416 are the highest they've been in 9 months (November 2018). They are still shy of the 10 year average, and only 2% higher than the recent low hit in June, so let's wait a bit on this one before calling it out of the woods, but some other indicators show things improving in the condo market (see below).

I've been mentioning signs of condo weaknesses since December results. In June results I had a section called "Condo MOI higher all year." Things can change quickly. You can see below how the blue Months Of Inventory line (2019) sat higher than the black 2018 line from Jan to June, and now it's below for the last two months. (MOI below 4 most interpret to be a seller's market). The only tighter August condo conditions since tracking began 24 years ago was in 2016. The average for the last 10 years is 2.8 months.

There were about 1200 fewer active listings at the end of June than the 7-year average so this is a tight market. It looks like the slight easing in the first half of the year may be done. In fact, the 416 condo active listings in August of 2,448 were the lowest level since 2001. That's even more crazy when you consider how many thousands of condo units have been completed in that time (so the stock is way higher).

It's also a very similar story in sold over asking (SOA) numbers. The first 6 months of 2019 were cooler than last year (i.e. less heated competition). But now the last two months have surpassed 2018 (albeit barely in the case of July). I've only tracked this from 2015 onwards, but SOA in condos wasn't much of "a thing" before then (not really until 2016) so I'm calling the 26% for August 2019 an all-time August high.

This isn't a trend but I've got some space this month so I thought I'd talk about this. Here's the average freehold (i.e. non-condo) prices month by month over the last 7 years. Look at August 2019. It's $1,167K.

The GTA-wide TREB stats for August mention the average Detached house is $979K. But that varies a lot depending where you are. In the 416 it's the aforementioned $1,246K, and in 905 it's $918K. That's why I like to dig under the hood - though I only show the one "freehold" chart above.

Here's another chart I track but don't often share, that splits out the lowrise house types:

The overall stat is 99.4%, meaning if a house was listed for $1,000K, in August sales it would on average sell for $994K. But you can see that Detached houses are consistently at a lower rate than rowhouses, which are lower than semis. My hypothesis is Detached include a lot of big money properites. Nobody is paying $6M for a house listed at $5M in a bidding war. But they might pay $4.4M. And those big money ones carry more weight in an average (I think medians would tighten these gaps). And my theory why semi-detached are high in the 416 is because may of them are in downtown central areas and in East York where bidding war strategies are popular. Anyway, just wanted to talk about averages for the hell of it and share that chart.

Would you like to make better-informed real estate decisions? I believe knowledge is power. For that reason, I invest a lot of time researching and analyzing data and trends in the Toronto real estate market. My Chartered Accountant (CPA, CA) side also compels me to dig a lot deeper into the numbers on individual properties my clients are interested in. The better the information you have, the better decisions you will make. If you're interested in talking about your real estate situation, call me or reach out via the Contact Me section of my homepage.

Your home is the single largest investment you'll make—trust it with an accountant.