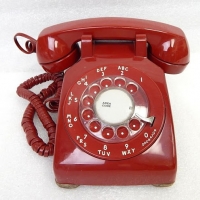 A brief history of the 416 area code

I chose areacode416homes.com as my real estate website domain and @areacode416 as my Twitter handle because it ties nicely into a couple of my passions: Toronto and numbers. It is also a nod to my high school and university summer job as a Bell Canada telephone operator. Zero was my work phone number back then. You may remember me from such catchphrases as "Bell operator — can I help you?" or "Directory Assistance — for what city please?").

1924 – First telephone exchange in Canada was GRover (e.g. GRover 1234, or 47-1234) in the Kingston Road and Main Street area. The first two letters converted to numbers the same as today, but it was common to use the word then.

1947 – Original 86 North American area codes are introduced, including 416. First digits use 2-9 (the “4”), second digits are either 0 (if it was the only area code for the state/province) or 1 (if there were multiple area codes). Ontario and Quebec are the only provinces to get two (613 was the other in Ontario). Here is the original 1947 original area code map (source):

1951 – Toronto exchanges begin lengthening from 6 digits (2 letters + 4 numbers) to 7 digits (2L+5N). The example below shows the original 2L+4N KEnwood (53) exchange on the "Coca-Cola" sign at lower right transforming to the 2L+5N LEnnox (still 53) exchange on the upper left "Wash and Dry" sign.

From 1953 when the western portions were changed into 519, the 416 area code sat relatively stable for 40 years until the 1993 split into 416/905. After that it only took half the time to triple in numbers (8 years before the first overlay code, 647, and then 12 more years for the next overlay code, 437). From 1993 the population growth and the explosion of mobile phones and direct business lines in the Greater Toronto Area has led to the introduction of 4 more area codes in that territory (the two 416 overlay codes, plus two overlay codes for 905: 289 and 365). It's a fast-paced world! Ontario now has 14 area codes (the below 13 plus 807 in northern Ontario):

Each area code accommodates roughly 8 million numbers (7-digit phone numbers still don't start with 0 or 1 or else it would be 10 million). So the City of Toronto has about 24 million numbers for about 3 million residents1. That sounds like ample room, but another overlay code (387) has been already been reserved for Toronto's future use. That would bring the total to 4 area codes for Toronto, but 387 isn't expected to be needed until around 2034.