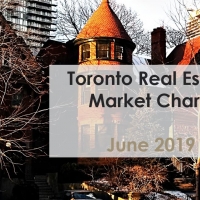 Here's your Toronto real estate market report for June. It's the third month in a row that GTA-wide sales volumes are up by double-digits versus last year (April +16.8%, May +18.9%, June +10.4%). But as always, you know we like to dig a little deeper.

Below is what I saw in the June stats. As always, these are just selected highlights. The full set of market charts is available on SlideShare.

1) The return of lowrise sales

You can see below how 416 freehold volumes are looking better than 416 condo volumes on a percentage basis. However it should be noted that freeholds are still sitting 23% below the 10 year averages (bottomed out at -27.6%) while condos are only 4% below their 10 year averages.

I've been mentioning signs of condo weaknesses since December results). One other way of showing this from 2019 is in the months of inventory (MOI). You will notice below that the 2019 line (blue) has been sitting above the 2018 level in each of the 6 months to date.

Now, the last three months have all been really close, and we're sitting 24% below the 7-year average (dotted blue line). Plus condo MOI has been below freehold MOI for an unprecedented 27 months in a row. So it's hardly a sign of weakness. There were about 1300 fewer active listings at the end of June than the 7-year average so this market is still tight. Just saying it's had some easing.

The story in days on market (DOM) is very similar. Things have eased off a bit versus last year, and are definitely eased off from early 2017's craziness.

And also very similar in sold over asking (SOA) numbers. The first 5 months of this year had condo SOA below 2018's rates. June was the first month with 2019 higher - but just by a bit. But definitely things have cooled since early 2017. This is why I like to look at multiple stats. Sometimes they give conflicting signs, but sometimes they jive like this with a consistent message.

Last month I showed how TREB keeps pointing out the OSFI (Office of the Superintendent of Financial Institutions) stress test has really been hurting affordability and they were blaming it for low volumes. So their mission this year is to get OSFI to reduce the stress test rates, and also to bring back 30 year insured mortgages (basically anything that helps people spend more money on houses, which will drive up prices, which will drive up commissions). But with the last 3 months  the monthly GTA-wide sales figures have compared to 2018 so far this year on a month by month basis (absolute numbers in a chart above), and a snippet from the accompanying press release for each one:

“Even though we’re seeing positive government action on a number of key housing files, one area that needs to be revisited is the imposition of the OSFI-mandated two percentage point mortgage stress test. While we saw buyers return to the market in the second half of 2018, we have to have an honest discussion on whether or not today’s home buyers are being stress tested against rates that are realistic."

“The OSFI mandated mortgage stress test has left some buyers on the sidelines who have struggled to qualifyfor the type of home they want to buy. The stress test should be reviewed and consideration should be given to bringing back 30 year amortizations for federally insured mortgages."

“The OSFI stress test continues to impact home buyers’ ability to qualify for a mortgage. TREB is still arguing that the stress test provisions and mortgage lending guidelines generally, including allowable amortization periods for insured mortgages, should be reviewed."

For the first 3 months, volumes were low, right around or a bit below 2018 levels. But for the last three months they've greatly improved.

“While sales were up year-over-year in April, it is important to note that they remain well-below April levels for much of the past decade. Many potential home buyers arguably remain on the sidelines as they reassess their options in light of the OSFI-mandated two percentage point stress test on mortgages. Longer term borrowing costs have trended lower this year and the outlook for short-term rates, for which the Bank of Canada holds the lever, is flat to down this year. Unfortunately, against this backdrop, we have seen no movement toward flexibility in the OSFI stress test,”

"While this result represented a substantial increase of 18.9 per cent over the 15-year low in May 2018, it should be noted that the result was still below the average for month of May sales for the previous 10 years."

"However, sales activity continues to be below the longer-term norm, as potential home buyers come to terms with the OSFI mortgage stress test."

"my hope is that we will see more movement from policy makers on two fronts: alleviating the constrained supply of housing and providing more flexibility around demand-side policies, including the OSFI two percentage point mortgage stress test and allowable amortization periods on insured."

“While some home buyers may have adjusted to the OSFI stress test by looking to more affordable housing options, this could present an issue over the longer term because we aren’t adding a meaningful amount of new mid-density housing supply."

There's a new TREB President in June but the same old talking points over and over again. Anyway, with volumes up a lot, I don't know how they can keep blaming the stress test. April and May it was "Yeah, volumes are up - but still below the 10-year average!" In June they conceded buyers "may have adjusted to" the stress test, but then said it was by buying cheaper housing options. But the funny thing is that the most expensive housing type, detached, is where the volumes increases are coming from (and the cheapest, condo apartments are actually down year over year).