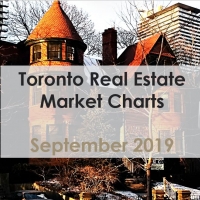 But keep in mind last year's 78,020 sales were the lowest total since 2008. You know we like to dig a little deeper here.

Below is what I saw in the September stats. As always, these are just selected highlights. The full set of market charts is available on SlideShare.

1) The return of sales volumes

Okay, I had a section in last month's results with the exact same title. It still looks true, but here's a new wrinkle - this is the first time that 416 freehold sales have been above the 7-year moving average since (dun dun DUN) April 2017.

Condo volumes, though mostly dipping below the 7-year average, have popped above a half dozen times since April 2017 so it's less of a big deal for those.

To be fair, in May and June results blogs I also talked about the return of lowrise (freehold) sales. The media has been screaming headlines like "September home sales up 22% in September" but while year-over-year (YoY) definitely has value, it's not the be-all and end-all. If I told you today's temperature is 5° warmer than last week, that's nice to know. But if that was an increase from 0° to 5° and the average for today for the last 10 years is 15° then that 5° increase still leaves us cold, doesn't it? This is why I pointed out the rise above the 7-year average in the first point, because that gives more context than just "up a whole lot (compared to a terrible year)!"

That would put it still behind the 2014 -16 run-up and the 2017 come-down, but in line with 2009 to 2013 numbers. As the population is increasing you'd expect this to edge upwards. That is if more housing units are built and available to be re-sold as TREB only measures re-sale housing transactions through its MLS. If this 88,000 prediction holds true, the 12.8% YoY increase would be the highest since 2009 (17.1%).

3) Freehold old over asking back up

Sold over asking (as percentage of monthly transactions) has been higher than last year for freeholds in 8 of the 9 months. That's cool. But what was of significance in September was that the freehold number reached the 5 year average for the month (42%). That hasn't happened since May 2017, when things were coming off of a crazy high.

Condos haven't had the same problem beating the 5-year average, since the bidding war landscape is a lot different in that segment than it was 5 years ago when inventories weren't as tight as they've been the last few years. But what's significant in condos is they've been ahead of last year in each of the last 3 months.

As always, you will find the full set of market charts (for this month and archived prior months) on my SlideShare.

Would you like to make better-informed real estate decisions? I believe knowledge is power. For that reason, I invest a lot of time researching and analyzing data and trends in the Toronto real estate market. My Chartered Accountant (CPA, CA) side also compels me to dig a lot deeper into the numbers on individual properties my clients are interested in. The better the information you have, the better decisions you will make. If you want to chat about your real estate situation, call me or reach out via the Contact Me section of my homepage.

Your home is the single largest investment you'll make—trust it with an accountant.