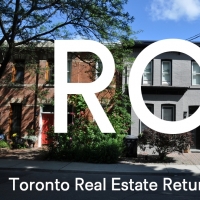 Are you curious how your house or condo has appreciated over time compared to the average in the city? Or how those average price increases look versus the stock market? Well then you came to the right place. I've been compiling this after the June and December market statistics are released. I will show some of the charts in this blog post, but for the full picture, the entire ROI report is available on the ROI report section of my website, or on SlideShare.

For the love of Pete read this before you rage out on me: I'm not claiming this is a perfect comparison. Houses aren't a liquid asset like stocks or bonds. For most people a home is primarily purchased because we all need shelter. It's also a more emotional purchase (and sale) than buying a mutual fund for your RRSP. For most it's not a pure investment vehicle, though price appreciation is certainly a welcome benefit when it occurs. This is a simplified look, out of curiosity, and to give a rough idea of performance versus major market indexes.

For a pure investment standpoint, a more apples-to-apples comparison would need to account for real estate transaction fees (e.g. land transfer taxes, real estate commissions, legal fees, etc.), which can be significant but percentages vary a lot from transaction to transaction. For example, on a $500,000 condo purchase in Toronto today you'd pay 1.295% LTT. On a $1,000,000 home, you'd pay 3.295% one-time on top of the purchase price. But looking backwards, the percentages have had small adjustments, and Toronto's municipal LTT didn't come in until Feb 1, 2008. And some people get a rebate, so it's hard to apply a number here.

On the stock side, they should properly include dividend re-investment and also transaction fees. Dividend re-investment can easily add a few points to the stock returns. For example, using the S&P 500 index, the difference between the with and without dividends returns has averaged 2% to 2.4% when I looked over 20, 30, and 40 year periods (simple average, source). If those "total return" numbers were readily available I would use them. (If you know where they are, let me know.)

You'd also factor in that in Canada you don't pay income tax on any gains on your principal residence. Another factor in real estate's favour is you can use leverage. You can't put $100K down to buy $500K of stock and have the bank loan you $400K (unless you're already rich). (Though leverage is a risky beast.) But like I said, it's out. of. curiosity.

Finally, I'm using 20 years as the outer limit here because I only have monthly data from TREB from January 1996. I'm not trying to avoid a 30 year comparison to 1989 heights - I just don't have that data. I know 1996 coincides nicely with when Toronto real estate turned around, but I'm showing 5, 10, 15, and 20 year returns to show as many periods over as long a period as I can.

Bounce back for the stock markets

When I posted this analysis for Q4 2018, here's what the returns showed:

Calendar 2018 was a rough year for stocks. But in just 6 months the 12-month view has turned into this, with all of the indexes swinging back into positive territory (though the TSX just by a hair):

But that's how these things go. In the GTA 2016 real estate had a record year in 2016 and in early 2017 prices were up 30% year-over-year (YoY). Then in Q2 2017, around the time of the April 20th introduction of the Ontario Fair Housing Plan, things went south. The higher you go up, the further you have to fall.

The housing numbers compare all transactions in Q2 (April to June) versus Q2 of the prior year. Keep in mind this "SOLD" sign represents all of Toronto residential real estate, so it's essentially a portfolio of all houses and condos sold in the 416 area code (from the western edge of Etobicoke to the eastern edge of Scarborough and everything south of Steeles). In that way it's much like the indexes on this chart, which are a portfolio of stocks (albeit a subset of top stocks). And like a stock index will have winners and losers, underlying that 5.9% 416 real estate portfolio number for Q2, condo apartments were up 5.9% YoY, while detached houses just kept flat at 0.04% up.

Don't sleep on the effect of mix

You can see that detached was flat and that condo apartments went up that 5.9%. But also happening behind the scenes is that the more expensive detached houses ($10 beer) went up from a 26.9% share of the total Q2 transactions in 2018 to 29.0% in 2019, and the cheaper condo apartments ($5 beer) went from 54.5% to 50.6%. (Those two housing types combine to make up about 80% of Toronto transactions, with attached housing - which is priced in between the two extremes - making up the remainder). So while the condo price increase helped the "All real estate" number increase from $869K to $920K - it was also helped largely by adding more of the expensive homes in the mix.

Toronto Real Estate (dotted brown line is composite number) is very competitive in any view you take here. From 7 years out and longer all the real estate types are from 6.5% to 8.4%. And you can tell they are a lot less volatile than the stock market (only TSX shown below, but its 20-year CAGR of 4.3% is very similar to the S&P 500's 3.9% and the MSCI's 4.1%.

In the longest views, Toronto Real Estate is on top, though the timing coincides nicely with when the Toronto market began it's rebound from the 1989 bubble bursting. From it's peak in 1989, the annual average price in the GTA declined in 6 of the next 7 years. For 22 straight years from 1996 to 2017 the annual average Q2 price increased, before finally falling in 2018. It's been an exceptional 23 year run, which I wouldn't expect to repeat. Here's a look at some of the longer term CAGRs.

The two most transacted housing types in the 416 are detached houses (23% of 2018 transaction) and condo apartments (55%), so that's why I've narrowed on them. As to which has performed better, the answer depends on your time frame. Given detached houses were negative in 2017 (Q4 vs. 2016 Q4), and flat in 2018 (+0.1% YoY), and continue to be somewhat flat so far in 2019, condo apartments have shot by them in recent years. In fact in a 1 through 7-year return view, condo apartments outperform detached houses. Beyond that, detached is usually slightly ahead (average of 0.2%, never by more than 0.6%).

When I wrote about this at Q4 2017 detached looked better in every view of longer than 3 years. Low available-for-sale numbers in the last 3 years have kept prices buoyant in the condo sector, but I still feel like detached will outperform in the long term. In my opinion, the average condo CAGR of 10.2% over the last 5 years is due for some regression to the mean. It's already been slowing this year. But the main reason I see detached houses doing better in the long run is that their supply isn't growing in the City of Toronto, but there are more and more condos each day.

When I first ran this report, I just compared it to the TSX. That's because we're in Canada and it's in Canadian dollars so it seemed the most relevant. But a good balanced portfolio would have US equities and international ones too, so I've added them over time. It gets too crowded if I shove all the stock indexes and housing types into the same chart, so if I ever compare to one index, I still go back to the TSX. That's not because it's been the lowest performer out of the three benchmarks I look at - it's simply because I think it's still the most relevant. So for goodness' sake I'm not trying to show how good real estate is by comparing to a lame index. I'm just presenting the numbers for what they are. If real estate currently sucked and the TSX was going gangbusters, I'd still present the numbers for what they are. So please can your conspiracy theories.

Again, these screenshots were just excerpts. For more charts (with exciting annotations! and proper image dimensions), check out the full report or past reports right here on my website, or on SlideShare.