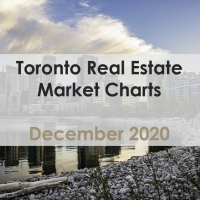 December 2020 charts: are investors back into condos?

In the blog last month, it was a continuation of the narrative for several months whereby freeholds were going strong and condos were kind of hurting, especially in the downtown core. And then December happened.

As always, you'll find the full set of market charts (only excerpts are highlighted below) here on my website. Let's get at December...

For the first 6 months of the year, whether starting the year the year off hot in Q1 or cooling for COVID in Q2, year-over-year freehold and condo sales were in lockstep.

Then, as things started to open up again, and the "pent-up demand" crowd was unleashed, freehold sales took-off way more than condos did. But a funny thing happened in December. Yes, sales in freeholds accelerated in December from about 20-30% the prior 3 months to up nearly 50%. But condos made an even larger jump, from basically flat for Ocotober/November to up 72% YoY in December:

Are condo investors back?

In December I was hearing rumblings of renewed investor activity. Maybe they're emboldened by the vaccine news and are seeing the light at the end of the virus tunnel where people will return to the core and start renting agin.

In the last half of 2020 a lot of condo inventory had piled up:

So my theory is that the big sales jump in December was due to investors with a "buy the dip" attitude trying to scoop themselves up a bargain from potentially distressed sellers that had their places languishing on the market a long time. The stat that backs this hypothesis up to me is that the days on market (DOM) for December condo apartment sales was 33, which was a huge leap of 10 days from November at 23. The last time condo apartments had a DOM increase of more than 10 days was back in December 1999. So that's telling me this was likely a bunch of old stock being liquidated.

For all condos (88% of sales from apartments, 12% from townhomes for 2020) the DOM for December was 32, which was a jump of 6 from last December. That made it the highest YoY increase of any month this year, even beating out the COVID-related 5 DOM jump in May (from 17 last year to 22 this year). So again, it appears a lot of older stock cleared out.

For what it's worth, I looked into the start of January and condo apartment sales were up 52% YTD in the first 10 days - and 100% in the investor-laden downtown core (C1 and C8 areas).

Thinking of other ways of looking at this, I looked quarter by quarter (and then broke down Q4 month by month) to check for activity downtown (where there are more investors) and activity in smaller condos favoured by investors (i.e. under 600 sqft, which are usually one bedrooms and studios):

There was definitely a rise through the Q4 months in the share of downtown sales, rising every month from the 34.4% Q3 average, to a big jump in December to 40.5% of all 416 condo apartment sales being in TRREB's C1 and C8 zones (south of Bloor, Dufferin to DVP). And I've also highlighted that share of small apartments as a percentage of all sales took a big leap from Q3's (and October/November's) 31% to be 37% in December.

So there seems to be a few things pointing to

a large amount of "investor" activity in December's condo sales.

So if condo sales went bananas (and condos apartments and townhouses combined beat the old Dec sales record by 31%), then did prices heat up?

Nope. The Home Price Index for condo apartments fell again and is dangerously close to the prior year number. Apartment HPI hasn't had a negative YoY month since April of 2013, back when the benchmark price was $311K.

So again, it looks like the properties that buyers were scooping up "deals" on properties that were languishing on the market. Another stat that seems in-line with this hypothesis of non-heat was the percent of properties sold over asking (SOA). The 15.9% mark for December was the lowest month since March 2016 (57 months ago):

In a similar vein, condo apartments that sold went for 98.1% of the last listed price, which was the lowest figure since January 2016.

Going a bit broader than my usual 416 to look at TRREB's whole area, which is basically the GTA but a bit broader (it includes some of Simcoe and Dufferin counties. Having a look at the year's sales they were atually pretty flat in the 416.

The difference is the composition changed. There were a lot less condos and more freeholds sold this year. Actually the composition changed so much that freehold sales hadn't been this high a share (43.8%) since 2015 (45.2%). The supply of lowrise housing is pretty much fixed, and as you can see by looking in any direction downtown and seeing cranes, there are still a bunch of condos being built. And the lowrise supply is being turned over more slowly these days, so the upshot of all that is that the condo portion of sales has been generally rising. So this year's COVID-related activity went against the trend.

The other thing I want to point out is the dollar volumes for the year. You'll note that the value of TRREB residential transactions reached an all-time high in 2020 of $88.461 billion. That bests the old record of $82.578 billion in 2016, a year with nearly 18K more transactions.

The only prediction I'm going to make is that it's going to be another interesting year for real estate in Toronto and the surrounding area.

As always, the full set of charts are available here.