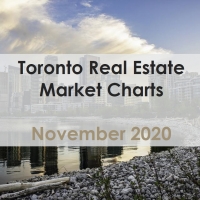 November 2020 charts: are freeholds out of hand?

Carrying on the narrative from last month, and the last several really, condos are still having a rough go of things, and freeholds are not.

You'll find the full set of market charts (only excerpts are highlighted below) here on my website. Let's get at November...

Freeholds are all caught up - and then some

Nothing new here, just that it keeps continuing. Finally, one of the last indicators to look worse has crossed over. Just two months ago, 30% of 416 condos (apartments and townhomes) were selling for over asking, which was the highest September in the last 6 years (which is safe to say is the highest ever since this method of selling is a fairly recent phenomena - especially in the condo segment). Now, two months later and it's 19% which is lower than any recent year except 2015, before this pricing strategy really took a foothold.

While sales have been slowing, inventory has been climbing and climbing, sitting at 5,401 active listings at the end of November. That's a new November record by over 300 (5,087 in November 2008).

The combination of slower sales and higher inventory has led to a high Months of Inventory (MOI). It has improved since the 3.6 in October, but the current 3.3 is the highest November since 2013 (3.4).

People tend to have short memories for this kind of things, so while it's cooled off from how hot it was in the last few years, it's actually not as wild historically as you may think. The average November for the five years of 2011 to 2015 was 3.3. And prices were still rising then. But let's talk more about pricing. There were a couple of interesting notes from November. The first is that the average price was lower than it was a year ago (by 1.5%). I'm going to ignore April because that was a weird anomoly, so other than that, this was the first negative YoY month since February 2015. That's a long run.

The other thing that I found interesting was that the Home Price Index (HPI) for condo apartments (the above includes condo townhouses, but apts are about 90%) continued to decline. From a peak of $634K in May, it's not sitting at $604K, about a 5% decline since peak for the "benchmark" condo apt. But note it is still higher than it ended last year at ($590K) or was in January ($595K). So it's hardly a bloodbath. But because the benchmark price has declined and last year was strong, the YoY increase is sitting at 2.6% now. Since they started the HPI in early 2012, this is the lowest YoY increase in the benchmark for condo apartments. I mean it's still positive, so again, not a great tragedy, but just pointing it out.

So about that "freeholds out of hand" thing?

One of the things I track is the ratio of Detached prices to that of Condo Apts. Detached is about 70% of 416 freeholds and Apartments are about 90% of 416 condos so they're about 80% of sales transactions. And many people use condos to enter the market and get on the "property ladder," then trade up to a detached home once they've built up some equity. So it's interesting to track the relation.

Well look what has popped above 2.25 again:

I'll be the first to say that where I've drawn the shaded target area for this ratio is very arbitrary. I took the nice and round and simple number of 2 and padded it by 0.25 on either side to make 1.75 to 2.25. Turns out 232 of 299 months have stayed within these parameters (78%). But it seems like whenever this ratio strays too far, it falls back in line. My theory is that once freeholds become too far ahead of condo prices (ratio gets hight), people can't trade up anymore and the freehold market stalls. And if condo prices get too high (shrinking the ratio) then trading up becomes attractive, or people that are jumping into the market will just pony up the difference to get into a detached and skip the condo step on the ladder. It would be nice to have more hard data around what share of people buying detached are indeed moving up (from condo apartments, and from attached housing), and what share are just jumping in. But the theory seems to work on an intuitive level (at least for me!).

Note the 25-year peak of 3.06 in February 2017. You may recall detached houses were having a huge run-up in early 2017 before the Ontario Fair Housing Plan came along in April and doused the flames. Then detached prices came back to earth a little, but condo apartments remained strong for a few years. Now, after the market started moving again after the initial COVID shutdowns, freeholds have been on fire and as we saw above, condo prices have come off, making this ratio grow again. At some point, condos are that much cheaper and people start buying them again, their prices rise again, and the ratio drifts back to it's normal range. Or at some point detached, which has its benchmark up 10.1% up YoY, will become too far out of reach and people go back to the more affordable condos.

This 2.31 may continue to rise, but I caution that if it gets up in the high twos, I'd say a period of adjustment is looming.