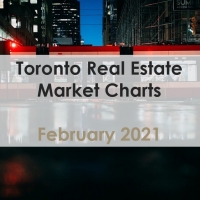 In the blog last month, I was noting how December condo volumes all of a sudden spiked up and I investigated whether investors were back. (Spoiler: I thought they were.) This month, I'm going to double down on that and look at some of the same things as January's 416 condo sales numbers were record-breaking.

This month I want to also highlight that I set up new charts (20 of them!) that are now responsive so you can hover over any line and find the year and the number for that month (or whatever it is). You'll find them on the Monthly Market Charts page.

Everyone is using the "underlist and hold offers" lately. And it's happening at levels not seen since the frenzied market of early 2017 (before the Ontario Fair Home Plan came in on April 17, 2020).

When we look at the breakdown within the three freehold types, it's actually row/townhouses and semi-detached that are going wilder. To me it's because these are the lower-priced choices (average rowhouse price was $1,156K last month, $1,324K for semis, and $1,684K for detached houses). There are just way more buyers that can afford the attached house prices so there are a lot more offers on offer night, and some agents underlist to a ridiculous extent to waste people's time and crush hopes and dreams (I guess).

Condo market is actually heating up

Last month I asked if condos were hot or not, because there were conflicting signs. I am now officially reporting that things are heating up. First of all, inventory levels have shrunk right up. They are now back to recent year numbers - which it's important to note are historically low. Just look at 2015 and 2016 (the light grey lines) - that's where it was normal to see condo inventories until the condo mania of the last few years.

Months of inventory (MOI) is now below 1 for condos, which puts it deep into sellers' market territory. So now we're starting to see prices rise.

People are bagging on condos because the average price is lower than last year by 5%. But it's the third highest month ever. And if we look to the home price index (HPI, which looks at a benchmark condo, which should eliminate compositional factors) it shows...

... that they are the same as last year. Actually when you go to a decimal place, they are down 0.4%. That's actually the first time condo apartment prices are negative year-over-year since the HPI first got released in 2012. They are down $24K from the $634K peak last May, but to me it's notable that prices have turned around in the past two months, climbing from $597K in Dec to $598K in Jan, and now $610K. The way the weekly sold-over-asking figures are increasing every week in condos, I'm guessing we'll see another bump up this month. I'm seeing a bounce back in individual buildings I've been watching.

Another reason I think condo prices may be back on the way up is because detached housing is getting too out of hand. Note the the spread is now over $1 million dollars. A gap that large is going to make condo apartments look a lot more attractive to some people (and attainable). But you ee what happened after it reached $1 million back in 2017. Let's watch how long it can stay over $1 million this time.

What I'm afraid of

So freeholds have been hot for a while, and condos now seem to jumping on the runaway train too. The two most recent times the market felt this heated were in early 2017 and early 2020. In 2017 the aforementioned Ontario government intervention splashed cold water on the face of buyers and cooled things off. Last year it was COVID-19 that slowed the train down. What I'm worried about is what can cool things off now? I think the government's main focus is COVID-19 and I don't see too many other tricks in their bag. Then again, I don't think whatever they announce has to do much - it's more about psychology. If you look at the April 2017 measures, there wasn't that much in there to warrant the reaction it caused - I think it was just the fact they did something made people sober up a bit.

But with interest rates looking like they're staying low for a couple of years (variable at the very least), I'm not sure what's can slow things. And they need slowing.

Again, I've got newly-designed market charts up now, and they are available here (as are the historical versions for 2019 and 2020).

Would you like to make better-informed real estate decisions? I believe knowledge is power. For that reason I invest a lot of time researching and analyzing data and trends in the Toronto real estate market. My Chartered Accountant (CPA, CA) side also compels me to perform a lot of due diligence work on properties my clients are interested in purchasing. If you have better information, you should have less risk and be in a position to make better decisions for your hundreds of thousands of dollars.