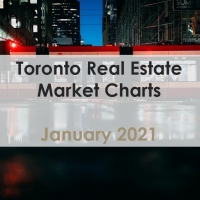 In the blog last month, I was noting how December condo volumes all of a sudden spiked up and I investigated whether investors were back. (Spoiler: I thought they were.) This month, I'm going to double down on that and look at some of the same things as January's 416 condo sales numbers were record-breaking.

This month I want to also highlight that I set up new charts (20 of them!) that are now responsive so you can hover over any line and find the year and the number for that month (or whatever it is). You'll find them on the Monthly Market Charts page.

So by this measure, condos are certainly hot. "OMG, there's a buying frenzy!"

They're really not (they're not hot)

Let's explore some other measures, as I have "Hot Shot" by Toronto's own Leather Uppers in my mind.

Pretty much same as December and same as last year, so I think that's a slam dunk no.

How about sold-over-asking stats? Are people climbing over one another in bidding wars to secure condos?

As you'd maybe guess from the fact that prices aren't growing, that's also a "No." The 20% SOA for January was below the 7-year average of 23%, and the lowest January since 2016, right before condos-as-an-investment really took off with the masses.

So what I'm taking from this is January (and December) sales were very high as a bunch of investors swooped in to grab old inventory that had been languishing on the market (hence no bidding wars, a high DOM, and not much change in price).

About those condo investors...

I've updated a chart I prepared last month. It showed the December uptick in sales was also accompanied by in increase in sales downtown (popular for investors), and in in the share of "small apartments" (I was using anything up to 599 sqft).

It indicates January's share of sales downtown in January kept up at December levels, and the share of small apartment sales in 416 and in downtown (TRREB's C1 and C8 zones) also remained at the boosted December levels.

Furthermore I checked the share of 1 bedroom sales (with or without a den) as a percentage of all sales. In October it was 47%, but in December and January it was 55% (November was 52%). The share of the 1 bedroom sales that were downtown jumped from 48.7% in October-November to 51.7% in December-January.

So from all of this, I'm still seeing that investors are back. Now, will they continue buying up inventory (which has been rapidly declining, at a rate of over 120 listings a week over the last 6 weeks)? Or were they just scooping up old product that might've looked like a deal? Stay tuned...

Again, I've got newly-designed market charts up now, and they are available here (as are the historical versions for 2019 and 2020).

Would you like to make better-informed real estate decisions? I believe knowledge is power. For that reason I invest a lot of time researching and analyzing data and trends in the Toronto real estate market. My Chartered Accountant (CPA, CA) side also compels me to perform a lot of due diligence work on properties my clients are interested in purchasing. If you have better information, you should have less risk and be in a position to make better decisions for your hundreds of thousands of dollars.