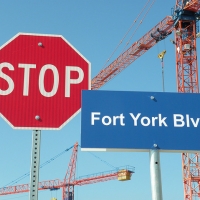 I was in a recent Toronto Star article on buying pre-construction condos, and I've been sitting on this data for a long time and meaning to write a post about it. Here's that post, on condo fees being higher in reality than were  advertised to you when they sold you your unit.

How prevalent is underestimation by developers?

First a bit about what these numbers are based on. I was provided with a spreadsheet list of 124 GTA condo projects that were registered (i.e. transfer of ownership to buyers) between Q1 2015 and Q1 2017. The list compared the condo fees per square foot as per the developer's estimate when the project was last sold, to the actual condo fees at Q1 2017. Of the 124 projects listed, 1 came in under estimate (by 1¢) and 3 came in right at estimate - leaving 97% over estimate.

Here's a look at all 124 projects, sorted in order of estimated condo fees from lowest to highest. You can see the only one that came in under estimate is #57 (the negative orange bar). (Larger version here)

To what degree is this understatement?

Below I've laid out the projects by the amount the developer's estimate was off by, from smallest to largest. The average project was 10.3 cents off, and 10 cents was also the median. The range was 1 cent under to 26 cents over. (Larger version here)

Caveats around the data

Here's a list of potential problems with the data:
• This information was provided to me. I didn't personally vet it to assess its accuracy. It would be hard to go back in time to check the developer estimates, and I can't tell if it they were confirmed every quarter. Plus, the resale condo fees could be based on limited transactions, so might be skewed if the condo board doesn't charge based on square footage (though most do).
• Ideally it would've compared fees at final day-on-sale to fees at registration for each, but now some are a month past registration, and some are two years past
• There may have been been a long period between sell out and registration. The longer out you estimate, the more margin for error. Plus you'd expect costs to increase in that time (though that should be built into the estimate, in theory). Also these 124 projects were completed anytime between January 2015 and March 2017. I suspected that maybe the larger estimate gaps would be for the two year old ones, versus the two month old ones. But when I plotted it out, there wasn't much of a correlation between the registration date and the difference (R squared score of 1.0 would mean a 100% explained, so this is only 9% explained.)

What is my recommendation?

It's pretty clear underestimation is prevalent. With my auditing background, I always approach company statements with a "degree of healthy skepticism." So personally, I'd take whatever fees they estimate and build in a 20% buffer for your own budgeting purposes.

Here is a table I whipped up to quantify the annual impact (i.e. "the buffer"). In this first chart these would be your monthly fees that the developer tells you when you're in their sales office:

Other risks in buying pre-construction

I'm not totally against pre-construction condos. I bought one myself and was very happy with it. I will note these risks versus buying a re-sale condo (where what you see is what you get).

The point is that with re-sale condos, at least you can see exactly what you're buying. With pre-construction, there are several risks to be aware of. You're allowed to bring in a realtor to represent you with a pre-construction purchase. They will be paid their commission by the developer, and they will be looking out for your best interests and offering you guidance and hopefully giving you input on the risks that I just listed.

[UPDATE - I went on to write a post dedicated just to pre-con risks, called "12 Risks of buying pre-construction condos" where you can read about the above (in more detail) - and more.]