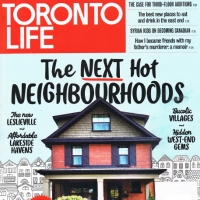 I received the new Toronto Life in my mailbox yesterday. I'm sure you'll see more online about this soon, as they tend to bleed the magazine's content out over the course of the month. (Update: story is now posted).

So of course I read the Next Hot Neighbourhoods cover story with interest. In prior years they did a "Where To Buy Now" and it was typically 10 neighourhoods in the 416 (12 in 2015). This year they have expanded it to 20 neighbourhoods, though those of your primarily interested in the 416 still get 10 as half are 416 and half are 905.

Here's the map overview. You've got 9 places north of the 401, 3 primarily west of Toronto, 3 primarily north, and 4 to the east (I'm counting Port Perry as east and Brampton west even though they are both also north).

Here's that list from #1 to #20. They say they looked for the best values, parks, schools, shopping, and commute times. But that's as clear as the methodology got. And they don't indicate what periods the average prices covered, or what they represented (but my best guess is it's the average freehold price, taking in detached and attached houses but excluding condos). What they do say is these places are possible to "buy in (and live well) for less than a million."

The blue bars (average prices in thousands) are for 416 and yellow for 905, while the line represents the distance from Union Station.

is there a correlation between the distance from Union Station and the price? Apparently not so much (an R-squared value of -0.02 suggests only 2% of the variability is explained by the model). You've got something relatively close like the Junction Triangle (10km) having a high price of $949K, but then you've got Holland Landing (62km) too, $967K. Same on the lower end, with Mimico (13km) one of the closer areas at just $586K, but then O'Neill in Oshawa is even cheaper at $474K and it's a 62km hike.

Ranked by closeness to the core

It really shows how big this city is when something like West Rouge (on the Pickering border) is still in the city at 35km away - the same distance as to Hurontario (think Square One) in Mississauga. On Google Maps I calculate that driving the western to eastern City of Toronto limits on the 401 is about 42 km.

The most affordable area is one of the furthest from the core, located out in Oshawa. The description in the magazine compares the area to Moore Park. Sounds delightful, actually. Speaking of nice houses in Oshawa, I've long wanted to visit this historical gem.

Mimico is an interesting one. It actually appeared in Toronto Life's "Where To Buy Now" 2012 edition. There is a lot of development slated for that area. Having looked out there recently with clients, you can see a bit of tear-down activity, where people are taking down older bungalows on wide lots and either building large single family detached homes on them, or putting two semis up. The GO station is always a draw and a lot of the large scale development is predictably centered around there.

This price smelled the most off to me of all the neighbourhoods, but it does call into question the accuracy of the other areas (especially the ones I don't really keep tabs on the values in).

What do I think of their choices?

Well, I do really like the Junction Triangle and Mimico, and think they have good upside still, but I would've said the same two or three years ago also. Some of their "up and coming" status has up and came.

Rockcliffe-Smythe is a longer term play, I think. For something similar, I prefer Weston-Pellam Park as it's not as far west and is more south. Oakwood Village is definitely cheaper than Wychwood and I like it if you can get fairly close to St. Clair and the LRT.

In the east I like their choices of Greenwood-Coxwell and South Riverdale, but again I think they may be understating prices a bit (South Riverdale is listed at $903K, but average freehold sale in last three months was $1,016K).

Out of curiosity, I looked up the prior issues looked, with Mimico and Greenwood-Coxwell bolded as they are also listed in this year's Next Hot Neighbourhoods issue. (peach = west, blue = central, yellow = east)

Some have definitely moved further along the gentrification spectrum in the last two to five years, but basically it's hard to pick a neighbourhood in this city that hasn't gone up by a good chunk in that time. Anyway, these lists are always fun and generate conversation (and clickbait for Toronto Life). Some of the numbers look a bit off to me, but for what it's worth (entertainment, at the end of the day), it seems like a pretty good list.