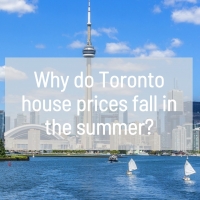 Why do Toronto house prices fall in the summer?

First of all it's important to know what goes into the price of a home. You may be familiar with MPAC (Municipal Property Assessment Corporation). They're the ones that do your property assessments every four years upon which your municipal property taxes are based. They're responsible for assessing and classifying more than 5 million properties so they know a little about home values. According to MPAC, the following 5 factors account for 85% of the value of a house:

Show me this decline you're talking about

There you are. You can see that prices typically decline from May through August. Here they are month over month (i.e. June represents June versus May):

How to go about this?

I looked into this with the suspicion that the answer lay more in the properties themselves than the buyers or the slower sales numbers. You may have noticed on all real estate listings that the property taxes are listed. I used these taxes to tell us the relative "value" of the average house from month to month. Since the same assessor (MPAC) assessing on the same day (the most recent one was January 1, 2016) then it should be a fair comparison of the perceived value of all homes. Just to double check, I plotted average prices of freeholds (houses) versus average property taxes to see if there was a relationship.

As you can see. it's a pretty strong relationship. The R² value indicates how closely the dots are to the fitted line. In this case, the score of 0.7541 indicates that the model explains about 75% of the variability. Simply stated, the higher the number, the better the model. So there's a strong correlation.

So what did you find out? What's happening?

In the case of 2016, Prices went down 4% from May to August on the transactions I analyzed, while the property tax declined 7% in the same period. So the price declines were largely explained by the "quality" of properties on the market. The quality, on average, was lesser through the summer months (be they smaller, older, or whatever combination of those 5 MPAC factors mentioned at the top).

I pulled the numbers from examining thousands of individual sold transactions. The numbers don't exactly match the 2016 line on the chart at the top due to slight re-stating from TREB over time (for example the top numbers showed July and August to be $1,104K and $1,096K where this chart shows them both at $1,101K. But the directional story certainly holds.

If you were wondering why the price decline of 4% was less than the 7% tax decline, I think the major reason was because 2016 was a year of rising prices, so over the course of the year prices would've increased if taxes stayed the same through the year.

As a footnote, the tax year changes through the year (with the taxes in the new tax year being higher). In January the listings show property taxes based on the old tax year. In February you started seeing the new tax year popping up. By June the majority were the new tax year (2016). I did another version of this chart showing the 2015 taxes in the beginning of the year bumped up to the 2016 numbers (blue dotted line), but the tax increase was only 1.3% that year so it didn't affect things much:

Do condos work the same way?

Yep, pretty much. The R² value of 0.7195 (72%) below suggests another strong relationship between property taxes (and therefore MPAC assessment) and sold price.

And you see below that generally when the average taxes increase from month to month, so do the prices and vice-versa. July seems to be an unusual month, but I haven't investigated further.

You're going to see average prices fall again this August from this July. You can see above that this happened for houses and condos individually last year (and in 15 of the last 21 years for houses, as noted). When you're reading overall TREB GTA stats you can also attribute some of the month-over-month decline to mix. For example, the more expensive detached house was 27% of 416 sales last July but fell to 25% in August (down from 34% in May). Correspondingly, the least expensive property type - condo apartments - went from 54% of sales in July to 58% in August (and up from 46% in May). So this will bring down the overall average. In 2017 you can layer in slowing or declining prices.

What will be most interesting to watch will be September. The mix usually increases back towards more houses and as you saw above, the most expensive homes (based on average property taxes) seem to go on the market in September. I expect average freehold/house prices will increase in September (they've done so in 20 of the last 21 years), but maybe not as much this year due to price pressures.