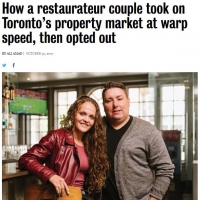 How NOT to climb the property ladder (Toronto Life article)

The November 2017 issue of Toronto Life seems to have given me a lot to write about since I just posted my take on their "Next Hot Neighbourhoods" cover article. This post is about a semi-regular feature called "Property Ladder" where they show the journey where people have climbed from a starter home worth X to their current home worth Y. It generally is presented like "Wow, look at the great house they have now. These people were so smart/fortunate to get in when they did."

This issue's Property Ladder feature were referred to as "The Downsizers" and the article was titled "How a restaurateur couple took on Toronto’s property market at warp speed, then opted out" and it touched a nerve with me. So much so that I wrote a letter to the editor and I'm writing this blog post.

It featured a couple that met while working at the same restaurant, then opened their own restaurant, got married, and bought their first place together all within a couple of years. It walks through how they've owned 3 properties before deciding they'd try renting. The thing that bugs me is that it seems to glorify how they made money on each property, even mentioning how they used some of those profits to pay off their business loans. But what really struck me is how often they moved (twice in 2014! twice in 2016!), and the utter waste of money in transaction costs they incurred.

What's that add up to?

The appreciation in the houses as presented in those bold red numbers add up to $210K. Hey, nice going! But more than half of that (about $120K) was eaten up in transaction fees, and they spent at least $25K on renovating the third property. All of those land transfer taxes and real estate commissions add up. So much so that those costs plus the renos ate up nearly 70% of the appreciation gains, leaving them with about $65K for their troubles. Here are my calculations:

You can see that they actually lost money transaction on that first place on Carr Street, once you take into account the transaction costs. For comparison I took a look at values on Carr currently, and I estimate that if they'd have made $50K more if they just stayed in that first condo all that time ($115K estimated net gain versus the $65K actual).

I cringe at the fact that they paid more in commissions to real estate agents ($75K) than they ended up with themselves. I'm a REALTOR® and I wouldn't recommend this "strategy" to anyone. I put that word in quotations because I don't think they had much of a plan. Due to high transaction costs, buying a property should be a long term play in order to pay off. Buying a house shouldn't be like trying a paint colour out in your living room. It's not so easy to just paint over if you decide it's not for you. The reasons the article listed for moving were:

1) area too busy and noisy, and too much of a commute
2) not enough space or privacy and maintenance fees were too pricy
3) older house wasn't energy efficient

I get sometimes that you move to a place and you don't realize some stuff until you move in (e.g. that noisy neighbour). But most of these are things they should've known about, like the commute. And that commute they were complaining about? Google maps tells me 16 minutes by bike, 20-25 by car, and about 35 minutes by TTC. Here are some real life situations that consider transaction costs:

I have clients in Markham that were considering moving. They like York Region and most of their family and friends are there already. But they wanted to put in a pool, have a place with a finished basement, and more closet space in their master (the moderately sized his and hers walk-ins are both overstuffed). They had looked into performing some renos on their place and they were looking in the neighbourhood of $150K. I calculated the transaction costs they'd be facing and they were looking at about $75K. Obviously it's better for me if I help them sell their current house and buy a new one (those two transactions would be in the neighbourhood of $60K in gross commissions to me in their case). But I'm an accountant, so I look at the numbers. And I want what's best for my clients, so I told them if it was me I'd probably stay because half of my renovations are covered by the transaction cost savings. But obviously there's some things you can't fix through renovation. Your lot size is your lot size, and all the renovation dollars in the world won't change that. In this case the backyard would be pretty tight if they put a pool in. If you want to be in a better school zone, renos can't fix that. But the internal stuff could be addressed. So what we've done is continue to keep an eye out for properties, but in the meantime they've addressed their closet situation and have gathered quotes for what they'd like to do in the basement. All of this because of transaction costs. [May 2020 update: They did the math on the pool and how much it would cost per swim and decided it didn't make sense. They renovated the basement and are happy they stayed.]

Neighbourhood study: Topping it up

In this same Toronto Life issue the had a feature called "Raising the Roof" about how "four homeowners staved off relocation by adding a third story." Exact same thing. Funny but I was just noting what a smart move this is to my girlfriend a couple of weeks ago as we passed the back of a house around the corner from me that blew out their partial third floor to become a full third floor. At their price point, they'd be into around $150K in land transfer and commissions to move to a similar home. If you need another room or two because you just added a kid, or you have an infant and another is on the way, and you otherwise love your neighbourhood, then you're not going to find any place closer than your own property. You might find a place with more room and the same price, but chances are you'll have to compromise on location. Or if you stay in the same neighbourhood but upgrade to more space, then you're probably compromising on price. The Toronto Life article featured extra floors being added from 600 sqft ($175K) to 1,400 sqft ($250K-$300). Obviously it depends on what kind of rooms you're adding and your tastes in finishes (someone else spent $350K on 650 sqft). The person in my neighbourhood was probably a lot cheaper as they just extended the floor. At the minimum, I say it's worth weighing the option (despite it not being beneficial to my pocketbook!).

Back to the subject couple

I still find it nuts that they completed 6 real estate transactions in just over 2 years. I mean, I've seen people bump around locations when they're renting, but to buy a place and get rid of it within the same year? And to do that in 2014 and again in 2016? Nuts, I say. At the end of the day, this couple is extremely lucky the Toronto market was growing at such a crazy pace in this time that it covered up for their bad tactics. Buying isn't for everyone. If you're going to try on houses like you're trying out a new hairstyle, then I'd recommend renting. There's way less commitment, and way less in the way of transaction costs (basically moving fees, and time and effort spent looking for a place). I would not recommend this "buy a house, try it out for awhile to see if you like it and if you don't you can always sell it" strategy. Think ahead. Have some sort of plans. If your plans call for having kids within a couple of years then considering looking for a place you'll grow into - or just rent until that time comes. There are plenty of rent vs. own calculators that could help you in your decision.