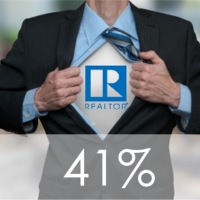 More REALTORS® in GTA than outside of Ontario

*MILESTONE ALERT* Based on the latest TREB membership numbers, we have now surpassed 50,000 REALTORS® working with the Toronto Real Estate Board (TREB). There are only 50,000 Realtors working outside of Ontario in the other 9 provinces and territories put together!

The July 1 population of Canada in 2017 was 36.7 million people¹. Currently roaming among us in this fine country are 120,000 Realtors (per Canadian Real Estate Association). The Ontario Real Estate Association (OREA) claims 70,000 members, hence the 50,000 outside of Ontario number. Anyway, 120,000 sounds a lot of agents/brokers. Going by that per capita rate, you would expect the Toronto Census Metropolitan Area (CMA) with its population of 6.342 million¹ would have about 20,700 Realtors. But the current 50,000 Realtors working with the Toronto Real Estate Board (TREB) means the Toronto CMA has 17% of Canada's population but 41% of the Realtors.

Here's the amount of TREB Realtors compared to the rest of the country:

Using the population splits from above, and expressed another way, you can really see the concentration in the TREB territory, where there are 2.5 times the national average (outside of Ontario) per capita and 3.1 times more than the rest of Ontario. When I last looked at these numbers in September of 2016, the Toronto number was 734 per 100,000 and it was 2.3 times the national average.

So the TREB numbers are still climbing. Below shows how many "New Members" have joined TREB each month since July 2016 (the start of TREB's fiscal year). It has averaged 388 a month, or nearly 100 a week.

But interestingly, when I compare the July to October period (first 4 months of TREB's fiscal year) for 2017 versus 2016 , the number of bandwagon jumpers New Members is down 28% YoY. OREA raised the bar for entry slightly by requiring you take 5 courses before you get your license (followed by one in the next two years) as opposed to 3 (followed by three in the next two years). But I'm guessing the slowdown in New Members has to do more with the slowdown in GTA sales (October YTD transactions are down 19.3%).

Less to go around

When people hear about Toronto's RECORD SALES years and CLIMBING PRICES, many figure Realtors are living large. Certainly, top selling agents are definitely rolling in it given today's prices. But even the big transaction growth in the last couple of years are no match for the number of agents hopping aboard. In my November market charts post I projected 91.8K transactions for 2017. I know that's down a lot from last year's record of 113.1K, but it's still the 5th highest transaction year ever.

Over the 16 years shown below, transaction growth has been 2.0% per year (based on a 3 year moving average), but the growth in the number of agents has been 7.2% per year. So with agents growing faster than transactions, there are going to be less transactions for the average agent. Hence, the red line below has declined from 4.3 transactions annually back in 2002, to only 1.8 transactions this year.

If I use the 3 year moving average for agents and transactions it works out to 2.3. But each transaction has two sides: buy and a sell. So you can double the number above and the average agent would be involved in a transaction 4.6 times a year, or one every 79 days. Did that saturation lead to less realtor activity than you would have guessed?

I have no statistics on how many of these are part-time and how many are full-time. It would be great to have separate stats for that, and you'd think it wouldn't be so hard to track if TREB (and other boards) wanted. But I spoke to a former TREB President and they said that if they publish stats like that it suggests there's a difference between a full-time and a part-time agent. And they don't want to upset all of those "side hustle" dues-paying agents. I fully believe there is a difference between FT and PT. I mean real estate is hardly brain surgery, but would you want your brain surgeon to be performing surgeries constantly, or just doing one or two a year on family and friends?