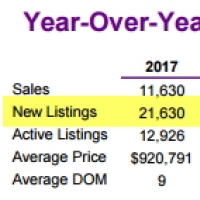 3 reasons the rush of new listings in Toronto is overblown

When the Toronto Real Estate Board (TREB) released its April 2017 statistics, a lot of media keyed in on the year-over-year (YoY) increase in new listings and how they "soared" or "jumped":

Indeed the overall numbers were up. Some commentators were saying that this was indicating a "flood" of listings as people were rushing to sell their homes and cash out of the market before the bubble burst. I have 3 problems with this, which I'll get to below. But first, I always caution that TREB stats are a very wide area and looking at averages based on that wide an area is going to dilute the usefulness of the information. How wide? This wide:

For the vast majority of my clients, I concentrate on the 416. Housing sales in the Township of Scugog (think Port Perry) affect me about as much as the amount of snowfall. You may be surprised to know that the actual City of Toronto represents a minority of TREB transactions. For all of 2016, the 416 had 41,126 sales out of TREB's 113,133, or only 36.4%. This is what bothers me when you read real estate stats that say they're for "Toronto" when they're really GTA numbers (or really, GTA-with-adjusments). I know it's my anal Chartered Accountant side speaking, but I believe this distinction is important.

Problem 1: 416 and 905 can act very differently from one another

Problem 3: How TREB tracks its data skews these numbers

This is the big one, and something that just occurred to me last night. Today I called TREB's Market Analysis department and confirmed my suspicion. It turns out part of the problem here is how TREB tracks "new listings." I just wrote a blog post on "terminated listings" and how they are up a lot this year in houses (in condos they are down) and what that might be showing about the market. This chart is from that post. It shows terminations as a % of sold in the month, but the absolute house terminations were also up in April - by the tune of 60% YoY (274).

You can see the problem in this example:
April 1 - brand new house listing comes out on the MLS
April 8 - offer night happens, no offers to owner's satisfaction, so listing gets terminated after 7 days on market
April 9 - same house comes out again with a new MLS #
TREB will count that as 2 new listings in April. Also, if that house had come on the market March 25, got terminated on April 2, and a fresh new listing comes out April 3, that also counts as a "new listing" for April even though it's really March inventory. So at least part of this "rush of new listings" isn't really what you or I would think of as new listings (i.e. fresh properties available for sale) but rather an inflated number due to how TREB tracks (individual properties will be double and triple-counted).

To attempt to find out how inflated, I took a look at everything with a "contract date" of April 2016 (basically the date the listing goes into the system, which is how TREB confirmed they track new listings) and noted the latest status the system (sold, terminated, suspended, expired, new, price change, sold conditionally, extended, draft). Then I compared for everything with a contract date of April 2017. The status was as of about noon today (May 15). My numbers could be different than TREB's due to timing and from me only tracking these three housing types (leaving out vacant land, multiplexes, etc. Also, I'm only looking at houses in the 416 below, as opposed to houses plus condos in the whole GTA at the top. So it's just a pure coincidence that my YoY increase of 33.6% matches theirs (representing an increase of 837 new listings from 2601 last April to 3474 this year).

You'll note terminations more than doubled (i.e. > 100% increase) over last April, and that over half of the 873 new listings increase was due to the increase in terminations (the 54% circled). So the non-termination increase was only 15.5% for houses. As I pointed out above, the number of new house listings is only a bit above the seasonal average of recent years. If we strip out some of that due to increased termination activity, then we're right within a normal range for April and all of the new listing fuss was totally overblown.