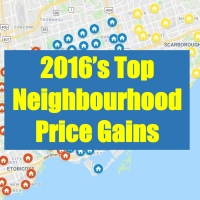 Which Toronto neighbourhoods had the largest price changes in 2016?

Pricey Central neighbourhoods in the north part of the city dominated

For this first of a three part series I compiled and analyzed Toronto Real Estate Board ("TREB") data from more than 24,000 sales of detached houses in 2015 and 2016 to calculate the year-over-year price change by neighbourhood. Last year featured strong demand and extremely low inventory of re-sale houses and condos leading to intense competition. Multiple offer situations and record-setting prices were commonplace. The results of this study answer the questions:

I've released a map with plots for each of TREB’s 144 neighbourhoods:

For context, the average detached house in Toronto grew by 19.6% in 2016. The median neighbourhood price increase was 19.5%. Here are the top 16 neighbourhoods for price growth in 2016.

Of the top 16 neighbourhoods with the highest price increases in 2016, the Central regions dominated with 14 placements, while the West snuck in 2, and the East wasn't represented (top in the East was #19 Crescent Town). The north part of the city is prominent, with over half (9) of the top 16 located were north of the 401 (and central, between the 404/DVP and Dufferin). Three more neighbourhoods were just south of the 401 & DVP intersection in the C13 zone, making it the second most popular gainer.

High prices meant high growth in 2016, as 17 of  the top 18 percentage gainers were above the median neighbourhood average price of $970K. On the other hand, below the 19.5% median increase, 63% were neighbourhoods priced below that $970K median average price.

Henry Farm saw the average detached house price grow $511K year-over-year to $1,558K. This community is located just south and west of the 401 & DVP, so buyers are likely attracted to the highway access. I'm not sure if these wealthy people ever use transit, but it's also located right on the Sheppard subway line. The large lot sizes are likely a bigger draw. The median lot width and depth of 2016 sold properties were 58 feet and 123 feet, respectively. The houses typically date to when the area was developed in the early to mid-1960s, and around half are backsplits or sidesplits. Below is a home right around the average numbers. It is on a 52' x 122' lot and sold for $1,551K.

Bayview Village is the King of Gain

As one would expect, the most expensive neighbourhoods grew by the largest dollar amounts. Bayview Village – second on the percentage gains list – saw its average price grow from $1.709 million in 2015 to be one of a dozen neighbourhoods with an average price over $2 million. The average detached home sale came in at $2.442 million in 2016. That $734K increase is enough to purchase an average-priced detached home in 25 neighbourhoods across the city. Ten of the top 15 below are also on the highest percentage gains list, and again the Central areas dominate, with only Edenbridge-Humber Valley representing the West.

Only 2 neighbourhoods were negative year-over-year: W9 Humber Heights (-1.1%, down by $9K) and E1 North Riverdale (-3.6%, down by $50K). I found no obvious reason for Humber Heights' decline. For North Rierdale, the mix of house type may have had something to do with it. in 2015, 82% of the sales sold in the neighbourhood were 2.5 and 3-storey houses. In 2016, the portion of those larger houses dropped to 60%, with the rest coming from less expensive 2-storey homes and even 1 1.5-storey place. It's still surprising to see when the rest of the city is up by 20%, and this being a desirable neighbourhood with a $1.35 million average detached house price.

There are now 62 neighbourhoods in Toronto with an average detached home price of over $1 million, up from 48 in 2015. Meanwhile $2 million neighbourhoods doubled from 6 to 12. [Both statistics using a minimum of 10 sales transactions for the year]

Stay tuned for the next two posts in this series to see the highest and lowest priced neighbourhoods, and the quickest and slowest neighbourhods to sell in terms of Days On Market.