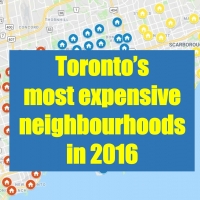 Toronto's most and least expensive neighbourhoods in 2016

This is the second in a three part series, mapping out information and statistics on all 144 Toronto neighbourhoods.  Part 1 talked about price increases.

Part 2 will now discuss the most and least expensive neighbourhoods in the city.

For context, the average detached house in Toronto sold for $1.252 million in 2016. The median neighbourhood average price was $970K (E1 - Greenwood-Coxwell). Here are the 15 most neighbourhoods for average sold price in 2016.

The difference between #1 Bridle Path-Sunnybrook-York Mills and #2 Forest Hill South ($641K) is enough to purchase a detached house in the 8 least expensive neighbourhoodsThe average of the 118 BPSYM sales might have been skewed by the 4 properties that sold for over $10 million (including the $22 million home with 7 bedrooms and 14 bathrooms). But even taking the median sale price of $3,881K still sits the neighbourhood comfortably ahead of the average price of #2 Forest Hill South. Drake has been getting a lot of press recently about moving into the Bridle Path.

What does an average-priced detached home in BPSYM look like? Well, it might not be as mansion-like as you think. This 2-storey house with 3 bedrooms and 3 bathrooms (and another 1 of each in the basement) sold for $4.33 million last year. It's right on The Bridle Path itself, on a nice 103' x 124' lot. Location, location, location.

Centre of it all

In the previous price growth post, Central neighbourhoods had 14 of the top 16 highest average price increases. In highest price, north and Central regions dominated again. The below cluster of 6 regions are all in the top 9 for price.

Many wealthy people like the north, as the top 20 neighbourhoods were all north of Bloor (#21 C8 Caggagetown-South St. James Town is the first that's south). Those areas tend to have larger lot sizes, as well as more ample room for parking. Central neighbourhoods actually placed 23 of the top 24 expensive. The top West entry was #13 W8 - Edenbridge-Humber Valley ($1.982 million), and the top East entry was #28 E2 - The Beaches ($1.523 million). You can see below how the blue Central areas dominate the top spots, a lot of the East is in the middle, and the West is scattered throughout, but with a heavy concentration in the lower third of neighbourhood values.

You'll notice below that 4 of the 5 neighbourhoods that make up W10 are represented in the least expensive 15. The remaining area, Thistletowne-Beaumonde Heights, was just off the list at 17th. These W10 neighbourhoods all fall in the extreme northwest corner of the City of Toronto — in Rob Ford’s former riding: Ward 2.

The most affordable neighbourhood for detached houses in 2016 was W4 Mount Dennis ($562K), which wraps around the triangle formed by Jane Street, Eglinton, and Weston Road.  Properties here were also the 11th slowest to sell in 2016, at an average of 20 days on market. It is the former home of the Kodak plant, and has been selected to be the westernmost terminus of the Eglinton Crosstown LRT, as well as becoming a stop on the Kitchener GO Transit line. Here's what an average sale looked like in 2016 in Mount Dennis. This 3 bedroom, 2 washroom by Eglinton and Weston Rd. also has a basement suite with kitchen. It's on a 30' x 98' lot with a garage and enough parking for 3 cars and it sold for $565K.

It's amazing to me that not too long ago spending "half a million dollars!" on a house was big expenditure. And now it wouldn't even buy you an average-priced detached house in the cheapest neighbourhood.

Here is a live version of the map, with all 144 neighbouhoods plotted so you can see the average prices (and more).

Stay tuned for the third post in this 3-part series to see quickest and slowest neighbourhods to sell, and a possible link to crime rates.