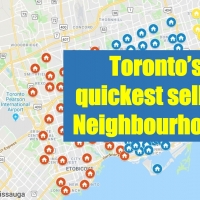 Where in Toronto are homes quickest (and slowest) to sell

This is the third part in a three part series, mapping out information and statistics on all 144 Toronto neighbourhoods.  Part 1 talked about price increases, while Part 2 looked at the most and least expensive neighbourhoods.

Part 3 will now discuss the what neighbourhoods are the quickest and slowest to sell.

East is the Least

For context, the average detached house in Toronto sold in 13.7 days in 2016. The median neighbourhood average days-on-market ("DOM") was 12.7 Here are the 15 most neighbourhoods for average sold price in 2016.

You will notice 5 of the top 6 are in the East. They are all clustered directly above or below the Danforth subway line. Three of those were below or around the median Toronto neighbourhood average price of $970K (Blake-Jones $971K, Woodbine Corridor $911K, East End-Danforth $903K). This possibly suggests people are really fighting to get those cheaper subway line houses before they get out of reach. Every neighbourhood in the Central or West areas along the Bloor-Danforth line averages over $1 million (cheapest is Dovercourt-Wallace-Emerson-Junction at $1.009 million).

What does an average-priced detached home in Blake-Jones look like? Well, this 2-storey house with 3 bedrooms and 1 bathroom sold for $975K last year. It's right on Pape with a 20' x 90' lot. It was nicely renovated and "showed well." However, it didn't even have parking.

The real surprise to me at the top of the list was Henry Farm up in C15 near the 401/DVP. Despite being a pricey area (average sold price of $1.558 million), it had the largest price growth in the city last year at 48.8%, and it was the third quickest area for sales.

Let me think on this $4 million purchase...

At the other end of the spectrum are the highest DOM areas. The longest average selling time by 35% (more than 10 days) is the Bridle Path area. The $4.3 million average price tag in this area – the city’s highest by a 17% margin – might have something to do with that. Also, the high level of customization a lot of multi-million dollar homes have can shrink the potential buyer pool further. The 5 most expensive neighbourhoods in Toronto appear in the top 8 positions below.

More than half (8) of the slowest 15 are in the West, and none are in the East. Since he West representatives aren’t explained by unaffordability (Mount Dennis, for example, is the cheapest neighbourhood in the city for detached housing), the reason may be undesirability. I investigated a possible link to high crime rates [2011 data]. In the top 10 lists across 8 crime categories, 5 of the 8 slow-moving West areas were represented. None of the slow-moving Central areas were on the crime lists. Removing property crimes like Stolen vehicles and Thefts over $5,000 to concentrate on more violent crimes, 3 West areas were represented:

So on the surface, without deeper investigation, it does seem like crime could be a potential factor in undesirability and longer days-on-market.

Here is a live version of the map, with all 144 neighbouhoods plotted so you can click on a neighbourhood and see the average days-on-market (and more).