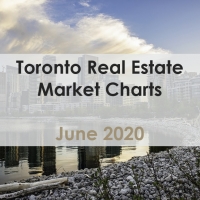 June 2020 charts: listings on the rise

Every month recently has been a lot different than the prior. In February things were hot. March was a tale of two halves, with the first half continuing hot, and then the brakes coming on in the second half after all three levels of government started implementing COVID-19 measures. Then April was one long month of riding the brakes, with 2,975 GTA sales representing the lowest April in the last 25 years (as far back as TRREB supplies monthly numbers for). May was the start of recovering. and June just happened and it continued the trend of sucking less bad than the prior month.

You'll find the full set of market charts (only excerpts are highlighted below) here on my website. Let's get at it...

One thing that really interested me last month was active listings. They climbed for houses and condos, as sellers continued to get more comfortable with having people through their homes.

But notice that active listings for houses (which grew by about 400 for the month, or 25%) are sitting 33% below where they were last year (black line)...

While condos (which grew by about 900 for the month, or 38%) are sitting 13% above where they were last year. And I can till you they've continued to steadily climb in July and will end up at the highest number since 2015.

On one hand this is far above the 2016-2019 levels, but on the other hand the levels of the last few years have been extremely low historically for condos, so it could just be a return to more normal levels (which should bring price growth down to more normal levels as well, because that has been unsustainably high in recent years). In the last 5 calendar years (2016-2020), the average month has ended up at about 2,600 condos available for sale. The 5 years prior to that (2011-2015) that average was 4,600. This lack of inventory was really keeping the condo market bouyant.

Prices are wildin' - or are they?

By looking at average pices, we see this for freeholds.

For a look at prices with less noise baked-in, let's look at the Home Price Index. To know what the heck the HPI is about, I wrote an explanation here. Basically it stives to be a more apples-to-apples attempt at looking at prices by applying current prices to a consistent mix. Below is the HPI for Single Family Detached (SFD).

It will be interesting to see if more air will be let out of the HPI. Really prices have remained within 1.7% in the last 4 months, and note they are still well clear of last year (black line).

I've been readnig a lot of "people are leaving the city for the country" (or the suburbs) stories. There are several ways to look at this, and I'll share two numbers with you.

So things appear hotter in 905 than 416. That could show that if people can work from home (WFH) they might want more space versus downtown amenities and entertainment. Or might show a flight from condos to lowrise housing. Or might not be proving anything, because this will take a long time to fully play out.

What will July bring?

Well, sales were a lot higher in June than I thought they'd be. And July is shaping up to be strong (for a summer month) with 416 freeholds up 28% in the first half of the month. And 416 condos? Well considering the last few months have been below 2019 levels, being slightly up in the first half is a bit of a win.